Tron and its legacy

I realise that this might not be the most well-known and loved sci-fi film of all times, but Tron does have a je-ne-seis-quoi that has made of it a bit of a cult film. When it first came out way back in 1982, it had to fight against other feature films such as Blade Runner and E.T. Not an easy task as you, my dear reader, can imagine. No wonder Tron is considered a box-office flop, but one that inspired a video game franchise, and which has managed to survive for almost three decades. 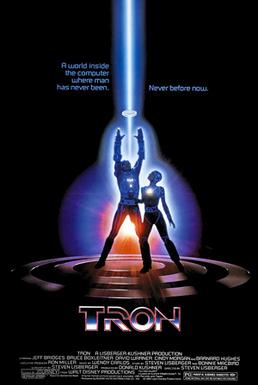 I think that one of the most surprising things was the fact that Disney agreed to go ahead with a project so far removed from the typical animation that has become a trademark of the studios. Tron was one of the very first few films from a major studio in which the use of computer generated graphics was used extensively. So much so that it is said that some Disney animators refused to work in the project because they were afraid that the computers would replace them. Not only that but the Motion Picture Academy refused to nominate it for special effects because they said the filmakers ‘cheated’ by using computers. The film did, however, earn Oscar nominations in the categories of Best Costume Design and Best Sound. I wonder what the Academy makes out of more recent nominations, let alone the new Tron sequel?

In any case, I am sure we all remember the red and blue neon glow of the “agents” and the light cycles. The definitively 80s neon glow effect was achieved by filming the live-action scenes in black-and-white using back-lit screen projection on black sets.

If you are thinking of revisiting the film before the sequel “Tron legacy” comes out, pay attention to the special effects. They indeed are special, as Tron undeniably had an impact in the way we think about computers, video and CGI in modern films.

Now, if you have not seen the film or you simply forgot all about it, here is a brief synopsis: Kevin Flynn, a video game programmer played by Jeff Bridges, is abducted to a surreal “world” inside computers where programs are people fighting in games. He joins “Tron”, a security program played by Bruce Boxleitner, in his struggle to overthrow a dictatorial program known as MCP (Master Control Program), played by David Warner. In the new movie, Bridges re-plays Flynn, who has aged in the time between being lost in the virtual world in the first movie and the present. Almost thirty years have passed since the first film and I am looking forward to seeing Tron again.

1 thought on “Tron and its legacy”