So, what is the Higgs boson? 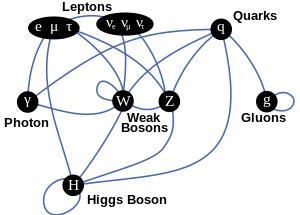 One of the most ambitious dreams of physicists is the description of all physical forces as a single set of mathematical relations; this is commonly referred to as unification. All observed phenomena are said to be described by 5 forces: gravity, magnetism, electricity, weak force and strong force.

Unification has happened in some cases, for example in the 1860’s James Clerk Maxwell showed that magnetism and electricity are described by a single set of equations. This is why some people talk about four forces after having unified electricity and magnetism into something called electromagnetism. Something similar happened in the 70’s when Abdus Salam, Sheldon Glashow and Steven Weinberg unified the weak nuclear force and electromagnetism .

One can ask how forces are transmitted and the current answer from physics would say that they are not transmitted directly between objects, instead the description indicates that forces are described by intermediaries called fields. In other words, all forces in nature are mediated by fields which result from the exchange of particles that the Standard Model called gauge bosons. For instance, in the case of  the electromagnetic force, the interaction of electrically charged particles happens thanks to the photon which is the exchange particle for this force. Similarly, for the weak force – a repulsive short-range interaction responsible for some forms of radioactivity is governed by the W and Z bosons.

The short-range of the weak force, and its weakness comes about because the W and Z bosons are very massive particles, unlike the massless photon. In 1983, scientists in CERN discovered the W and Z bosons and thus the so-called electro-weak theory has convincingly been verified. However, the origin of their masses is still a mystery. The best explanation at the moment is the Higgs mechanism.

The theory shows a symmetry between the photon, W and Z; nonetheless, this symmetry is spontaneously broken and it is thought that this breaking is responsible for the mass of the W and Z bosons. It is thought that there is a field, called the Higgs field, which is responsible for the genesis of mass. This field is named after the Scottish physicist Peter Higgs. Now, we mentioned above that every field has an associated particle, in the case of the Higgs field we have the Higgs boson. The Higgs boson is the only particle, from the Standard Model, that has not been observed. Its existence would explain how most of the known elementary particles become massive, and would explain the difference between the massless photon and the massive W and Z bosons. The Large Hadron Collider is expected to provide experimental evidence of the existence (or not) of this particle.