A few posts ago I wrote about the Great Uncomformity, and I was quite interested when I got to hear about Curiosity, the rover, photographing unconformities on Mars. As I explained in the aforementioned post, and unconformity is effectively a discontinuity in the layers of sedimentary rock or strata. 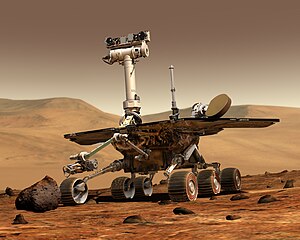 The Mars rover took a picture with its 100mm telephoto and it turned out that the subject of this landscape was a geological unconformity. The picture shows sediments that seem to have been deposited at a different angle from those below them. This we have seen before on Earth deposits where the phenomenon is due to wither volcanic or tectonic activity. Images taken from orbit suggested that the lower part consisted of sediments rich in so-called hydrated minerals, i.e. formed in the presence of water (yes, that is right, water!), but the layers above lacked the minerals. At this stage we will have to wait for further investigations to take place in order to get further evidence that the two layers were laid in different environments.