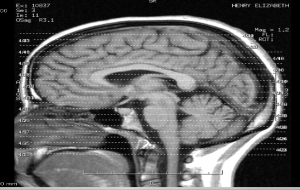 A few days ago I received a request from a reader (Thanks Paulo Zan) for information about magnetic resonance. The request did not specify more than that so I took the liberty of deciding that perhaps the request was due to coming across the term before and as such it is quite possible that a lot of us would have heard of magnetic resonance in the context of MRI scans.

Well, an MRI scan stands for “Magnetic Resonance Imaging” Scan and it is a widely-used technique to obtain images of the brain. The full name of the imaging technique is actually nuclear magnetic resonance imaging but it seems that the first word in that mouthful is sometimes avoided as it may have negative connotations for some. Other names include MRT or magnetic resonance tomography. MRI scanners use strong magnetic fields and radio waves to form images of the body.

As I mentioned above, the full name should include the word nuclear because the physical phenomenon exploited by the scanner is actually the absorption and emission of electromagnetic radiation by nuclei in a strong magnetic field. The absorption and emission of energy related to the frequency of the radiation in question and depending on the properties of the atoms, certain frequencies cause larger oscillations.Those frequencies are called resonance frequencies. An important feature of the phenomenon is that the resonance frequency of a particular substance is directly proportional to the strength of the applied magnetic field. In an MRI scanner it is this property the one that enables the imaging: if a sample is subjected to a non-uniform magnetic field then the resonance frequencies of the nuclei that make up the sample depend on where in the field they are located. The resolution of the images obtained depend on the  magnitude of magnetic field gradient and this strong fields are required. In a lot of scanners the detectors pick up radio signals emitted by excited hydrogen atoms in the body (remember that water is 2 parts hydrogen and 1 part oxygen). Due to the use of large magnets in the machines, the patients are required not to carry out metallic objects while in the same room as the scanner.