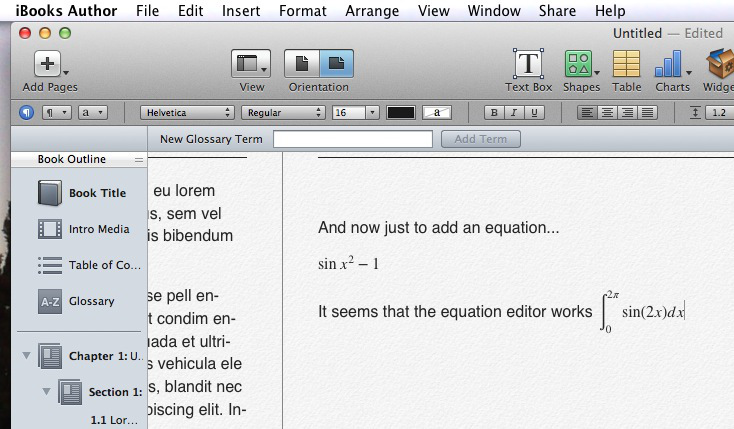 When Apple launched iBooks Author back in January 2012 I was quite curious to see the things that you were able to do with it. It all looked very nice and relatively easy to use. You can create documents using some templates provided and you then are able to export them as PDF or even publish them as iBooks.

Unfortunately, at the time, Apple failed to put any easy support to include equations or mathematical symbols. That alone put me off using the application altogether (see post). However, in the recent update (released on October 23rd) Apple has finally included an equation editor that uses LaTeX or  MathML. I have just tried it and it seems to do a good work. Definitely not as powerful as the actual LaTeX engine (it does not let you number the equations automatically for instance), but it is an improvement.

Here are some screenshots of the little first trial I did. As you can see the update clearly states that the new editor accepts native LaTeX or MathML:

Now, to insert a new equation:

This opens up the equation editor:

In the new window you can start typing your LaTeX commands. Notice that you don’t need to start an equation environment as you would do in LaTeX, you simply type the commands that will create the maths:

Once you have done that, simply tell iBooks Author to insert the equation, and voilà:

Have you used iBooks Author? What do you think of it? What is your opinion about the support for LaTeX?

I think I may give it a go, but will probably continue using LaTeX itself. If you want to learn learn about using it have a look at these past posts: