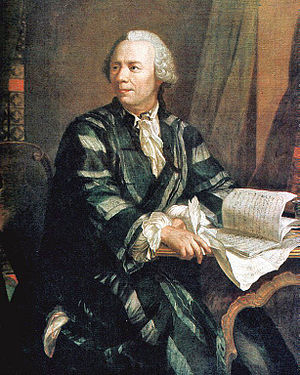 You can download this podcast in iTunes or Feedburner.

Euler was a native of Basel and a student of Johann Bernoulli at the University, but he soon outstripped his teacher. His working life was spent as a member of the Academies of Science at Berlin and St. Petersburg. He was a man of broad culture, well versed in the classical languages and literatures (he knew the Aeneid by heart), many modern languages, physiology, medicine, botany, geography, and the entire body of physical science as it was known in his time.  His personal life was as placid and uneventful as is possible for a man with 13 children.

Though he was not himself a teacher, Euler has had a deeper influence on the teaching of mathematics than any other man. This came about chiefly through his three great treatises: Introductio in Analysin Infinitorum (1748); Institutiones Calculi Differentialis (1755); and Institutiones Calculi Integralis (1768-1794). There is considerable truth in the old saying that all elementary and advanced calculus textbooks since 1748 are essentially copies of Euler or copies of copies of Euler.

He extended and perfected plane and solid analytic geometry, introduced the analytic approach to trigonometry, and was responsible for the modern treatment of the functions

. He created a consistent theory of logarithms of negative and imaginary numbers, and discovered that

has an infinite number of values. It was through his work that the symbols

became common currency for all mathematicians, and it was he who linked them together in the astonishing relation

. This is a special case of his famous formula

, which connects the exponential and trigonometric functions. Among his other contributions to standard mathematical notations were

for an unspecified function, and the use of

for summation. He was the first and greatest master of infinite series, infinite products and continued fractions, and his works are crammed with striking discoveries in these fields.

He contributed many important ideas to differential equations: the various methods of reduction of order, the notion of an integrating factor (often called an Euler multiplier), substantial parts of the theory of second order linear equations, power series solutions – all these are due to Euler. In addition he gave the first systematic discussion of the calculus of variations (founded on his basic differential equation for a minimizing curve), discovered the Eulerian integrals defining the gamma and beta functions, and introduced the Euler constant:

which is the most important special number in mathematics after

. He also worked with Fourier series, encountered the Bessel functions in his study of the vibrations of a stretched circular membrane, and applied Laplace transforms to solve differential equations – all before Fourier, Bessel, and Laplace were born. The origins of topology – one of the dominant forces in modern mathematics – lie in his solution of the Königsberg bridge problem and his formula

connecting the numbers of vertices, edges, and faces of a simple polyhedron.

In number theory, he gave the first published proofs of both Fermat’s theorem and Fermat’s two squares theorem. He later generalized the first of these classic results by introducing the Euler

function; his proof of the second cost him 7 years of intermittent effort. In addition, he proved that every positive integer is a sum of four squares, investigated the law of quadratic reciprocity, and initiated the theory of partitions, which deals with such problems as that of determining the number of ways in which a given positive integer can be expressed as a sum of positive integers. Some of his most interesting work was connected with the sequence of prime numbers, with those integers

those only positive divisors are 1 and

. His used the divergence of harmonic series

to prove Euclid’s theorem that there are infinitely many primes.

The distinction between pure and applied mathematics did not exist in Euler’s day, and for him the physical universe was a convenient object that offered scope for methods of analysis. The foundations of classical mechanics had been laid down by Newton, but Euler was the principal architect. In his treatise of 1736 he was the first to explicitly introduce the concept of a mass-point or particle, and he was also the first to study the acceleration of a particle moving along any curve and to use the notion of a vector in connection with velocity and acceleration. His continued successes in mathematical physics were so numerous, and his influence was so pervasive, that most of his discoveries are not credited to him at all and are taken for granted by physicists as part of the natural order of things.

However, we do have Euler’s equation ns of motion for the rotation ‘of a rigid body, Euler’s hydrodynamical equation for the flow of an ideal incompressible fluid, Euler’s law for the bending of elastic beams, and Euler’s critical load in the theory of the buckling of columns. On several occasions the thread of his scientific thought led him to ideas his contemporaries were not ready to assimilate. For example, he foresaw the phenomenon of radiation pressure, which is crucial for the modern theory of the stability of stars, more than a century before Maxwell rediscovered it in his own work in electromagnetism.

Euler was the Shakespeare of mathematics – universal, richly detailed, and inexhaustible.

Bilingualism key to language survival
There are about 6000 different languages in the world, but just a handful, including English, dominate. Some mathematical models have shown how dominating languages can lead to the decline and extinction of less popular languages. However. Physicists in Span are challenging this idea. According to Jorge Mira Pérez and his colleagues at the University of Santiago de Compostela earlier models have not taken into account bilingualism which allows both languages to co-exist and evolve.
The researchers compared the results of their model to historical data for the preponderance of Spanish and Galician from the 19th century to 1975 and found that the fit is quite good. They find that both languages can survive so long each is initially spoken by enough people and both are sufficiently similar. The paper was published in the New Journal of Physics.

Periodic Table of Shapes
We are very familiar with the periodic table of elements, whose invention is attributed to Dimitri Mendeleev in 1869 and it has become ubiquitous in many a classroom. The table is a visual representation of the periodic law which states that certain properties of the elements repeat periodically when arranged by atomic number. Researchers at Imperial College London are interested in creating a periodic table of shapes which would become a very useful resource for mathematicians and theoretical physicists looking for shapes in three, four and five dimensions that cannot be broken into simpler shapes. These basic blocks are known as “Fano variaties” and for them to represent practical solutions to physical problems, researchers need to look at slices of the Fano varieties known as Calabi-Yau 3-folds which give possible shapes of the curled extra dimensions required by string theory.

Enlarging Schrödinger’s cat
Quantum mechanics tell us that a quantum object can exist in two or more states simultaneously, this is called a quantum superposition and usually it can be seen in very tiny objects. Nonetheless researchers in Austria have recently demonstrated quantum superposition in molecules composed of up to 430 atoms each.
Erwin Schrödinger proposed a thought experiment to illustrate the apparent paradoxes of quantum theory in which a cat would ne poisoned or not depending on the state of a quantum object. Since the object could be in a superposition of states, the cat would thus be dead and alive at the same time. This highlights the difference between the classical and the quantum worlds and poses the question as to how big would the objects have to be in order to perceive their quantumness.
Markus Arndt and colleagues have shown the observation of quantum effects in large molecules tailor-made for the purpose – up to 6 nanometres across and with up to 430 atoms, several times larger than molecules used in similar experiments in the past.

Female hormone holds key to male contraceptive
Contraceptive pills have been in the market for 50 years not, but are only available for women. Scientists had known that high doses of certain hormones stopped ovulation, but extracting the quantities needed for scale production was too difficult. It was not until invention of progestine by Mexican chemist Luis Miramontes and co-workers that lead to the creation of oral contraceptives.

Recently, two studies published in Nature (1, 2)  point to a breakthrough to design a new class of contraceptive pills. Researchers have shown how sperm sense progesterone, a female sex hormone, which serves as a guide to the egg. Progesterone activates a molecular channel called CatSper, which floods sperm cells with calcium. Problems with progesterone sensing could explain cases of infertility. The results could pave the route to coming up with a male contraceptive pill in the future.