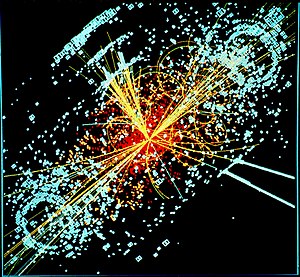 An example of simulated data modelled for the CMS particle detector on the Large Hadron Collider (LHC) at CERN. Here, following a collision of two protons, a is produced which decays into two jets of hadrons and two electrons. The lines represent the possible paths of particles produced by the proton-proton collision in the detector while the energy these particles deposit is shown in blue. (Photo credit: Wikipedia)

CERN has called for a press conference today (July 4th) for an important announcement. It turns out that they are reporting the claim of the discovery of a new particle “consistent” with the Higgs boson. It has been a search of 45 years for an explanation of how matter acquires mass. And the search is not yet over with this announcement: more work is needed to be certain that this is indeed the Higgs boson.

Peter Higgs was present in the audience in the conference theatre at CERN, Geneva. He was prompt to congratulate the team for their achievement. The famous boson is named after him and this was really a momentous event for him.

The CMS team, at the Large Hadron Collider (LHC), report that they have seen a signature in the data for a particle weighing 125.3 GeV, which is about 133 times heavier than the proton. If actually confirmed, this will be one of the biggest scientific discoveries in my lifetime, but even more exciting is the fact that this does not close the chapter, it may even open other avenues of research and understanding. And as such, the physicists at CERN say that, currently, the data they have is compatible with the Standard Model Higgs boson…